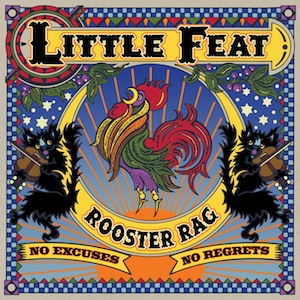 
Burlington, MA  Its borderline miraculous to have a band surprise you on its 16th studio effort, but Little Feats Rooster Rag  to be released on Rounder Records June 26  documents a vitality that many a baby band would love to have.  Bill Payne delivers four new songs written with the legendary Grateful Dead lyricist Robert Hunter.  Fred Tackett contributes four songs that demonstrate some superb songwriting and singing.  Paul Barrere drops a classic cover and a sizzling rocker written with the late Stephen Bruton.  Sam Clayton brings it with a cover of Little Walter.  New band member Gabe Ford keeps Feats funky rhythms going in a fashion that would have made Richie Hayward proud.  And Kenny Gradney just keeps on providing a truly superb bottom end.

All those other flavors add plenty, but in the end, the sound is unmistakably Little Feat.  Paul Barrere reflected on it, Im really pleased with how it came out.  Gabriel Ford steps up large  this is his first studio effort.  What everybody added to everybody elses songs is really remarkable.  It was truly a collaboration and it shows  its a good old Little Feat album.

Feats beautifully tasty blend of funk, New Orleans rhythms, Delta blues, and thirty other flavors of American music has survived the loss of several band members and the vicissitudes of touring life  in fact, its not only endured, but thrived.  Feat doesnt fail, and neither does Rooster Rag.

Rooster Rag will be avaialble on CD, MP3 and Vinyl at Amazon.