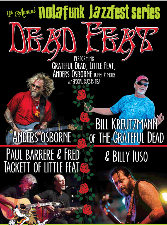 As a part of the fourth annual Nolafunk Jazzfest Series, slated for April 25 and 26, the ensemble will perform the music of The Grateful Dead and Little Feat as well as Anders Osborne tracks and other selections. There are also special guests that will be announced at a later date.

Tickets to the show go on sale to the general public on December 5 at 1 PM ET via TicketWeb.