Members Of Little Feat To Perform In A Concert To Benefit A.R.C. Angels Foundation

FOR IMMEDIATE RELEASE
June 15, 2017
BENEFIT CONCERT TO FEATURE MEMBERS OF THE LEGENDARY BAND LITTLE FEAT
ST. LOUISMembers of the legendary band Little Feat, along with Craig Fuller & Patrick Fuller, Ron Holloway, and special guests Al Holliday & The East Side Rhythm Band, will perform in a concert to benefit A.R.C. Angels Foundation on August 26 at The Pageant, 6161 Delmar Boulevard, St. Louis, MO 63112. The show will begin at 7:15 P.M.; doors open at 6:00 P.M.
Three admission levels are available: $37.50 General Admission; $47.50 Reserved Seating; and $100 VIP, which includes premium seating, artist meet-and-greet, t-shirt, and VIP laminate. Tickets go on sale June 16th at 10 A.M. and are available at The Pageant, www.thepageant.com, and 800-745-3000.
Little Feat was formed in Los Angeles in 1969 by the late, great Lowell George. The music remains an eclectic blend of rock and roll, blues, R&B, boogie, country, folk, gospel, soul, funk and jazz fusion influences. Today, Little Feat is composed of Paul Barrere, Sam Clayton, Gabe Ford, Kenny Gradney, Bill Payne, and Fred Tackett. Barerre, Clayton, Ford, Gradney, and Tackett will be performing at The Pageant.
Craig Fuller is a past member of Little Feat and founding member of Pure Prairie League. While with PPL, he wrote and sang the bands most noteworthy song, Amie, and was the major songwriter on the bands first two, most highly acclaimed albums. As a member of Little Feat, he was a major writer on Let It Roll, Representing The Mombo, and Shake Me Up. He will be performing with the members of Little Feat and his son, Patrick, at The Pageant.
Tenor saxophonist Ron Holloway is a well-respected musician on todays contemporary music scene. Over the years, he has been a member of an eclectic list of iconic artists, including: The Warren Haynes Band, The Susan Tedeschi Band, The Dizzy Gillespie Quintet, Gil Scott-Herons band, and the legendary Root Boy Slim & The Sex Change Band.
Al Holliday & The East Side Rhythm Band brings their searing, raw performances to stages from their hometown St. Louis, across the region, and beyond. The band offers a distinct brand of soul music that combines the loose, funky feel of New Orleans R&B along with the visceral power and intensity of East St. Louis own Ike and Tina Turner.
The show is being funded by generous donations from Edwards Carpet & Flooring, St. Louis, and PlanCorp, St. Louis. All proceeds from the show will be used to help prevent teen suicide.
A.R.C. Angels Foundation is a 501(c)(3) non-profit organization founded in May 2014 with the goal of providing educational programs that empower high school students to recognize the signs and symptoms of suicide and take the necessary actions to stop the loss of life. Visit www.arcangelsfoundation.org to learn more.
Contact: Rick Cantor
President, A.R.C. Angels Foundation
636-405-1746
[email protected] 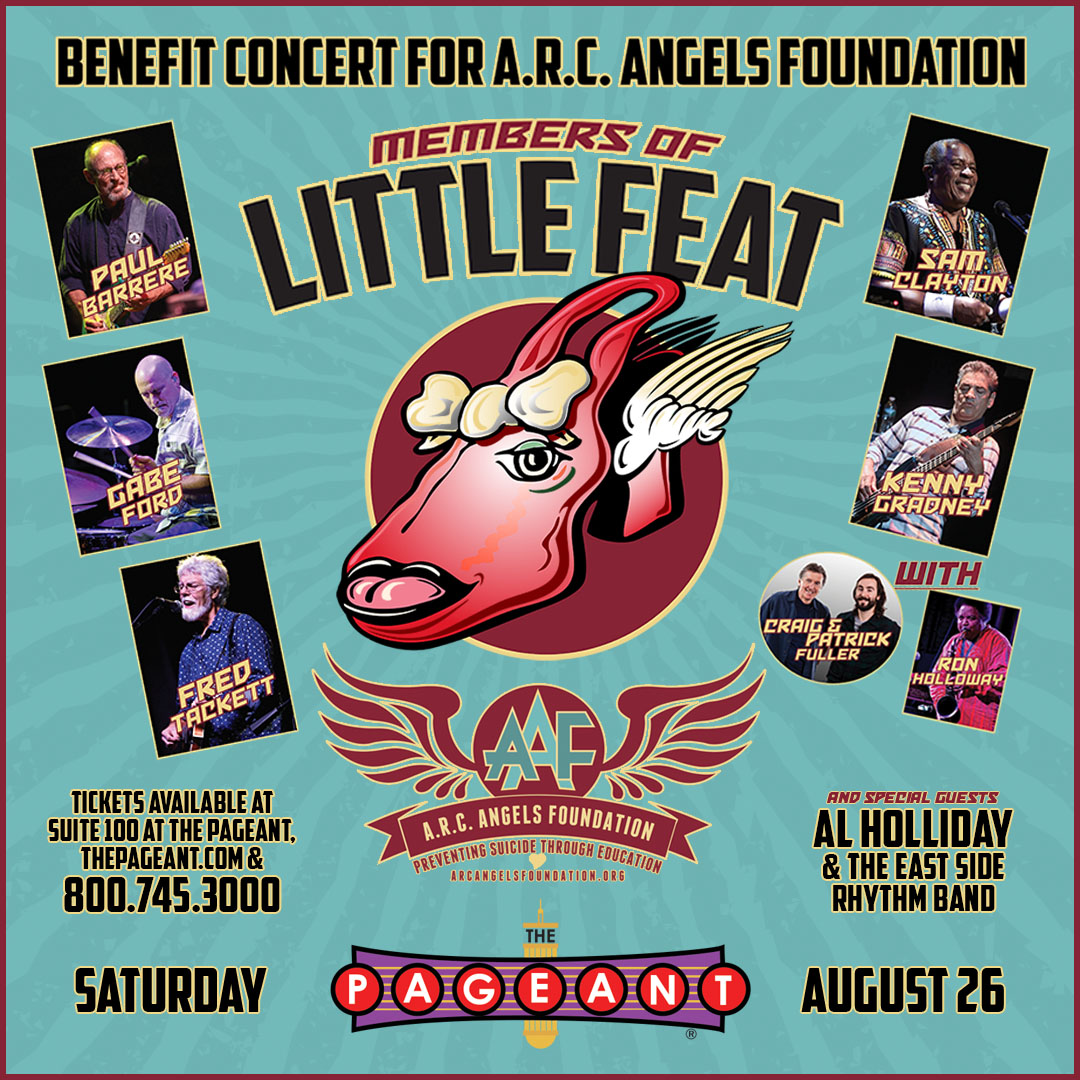