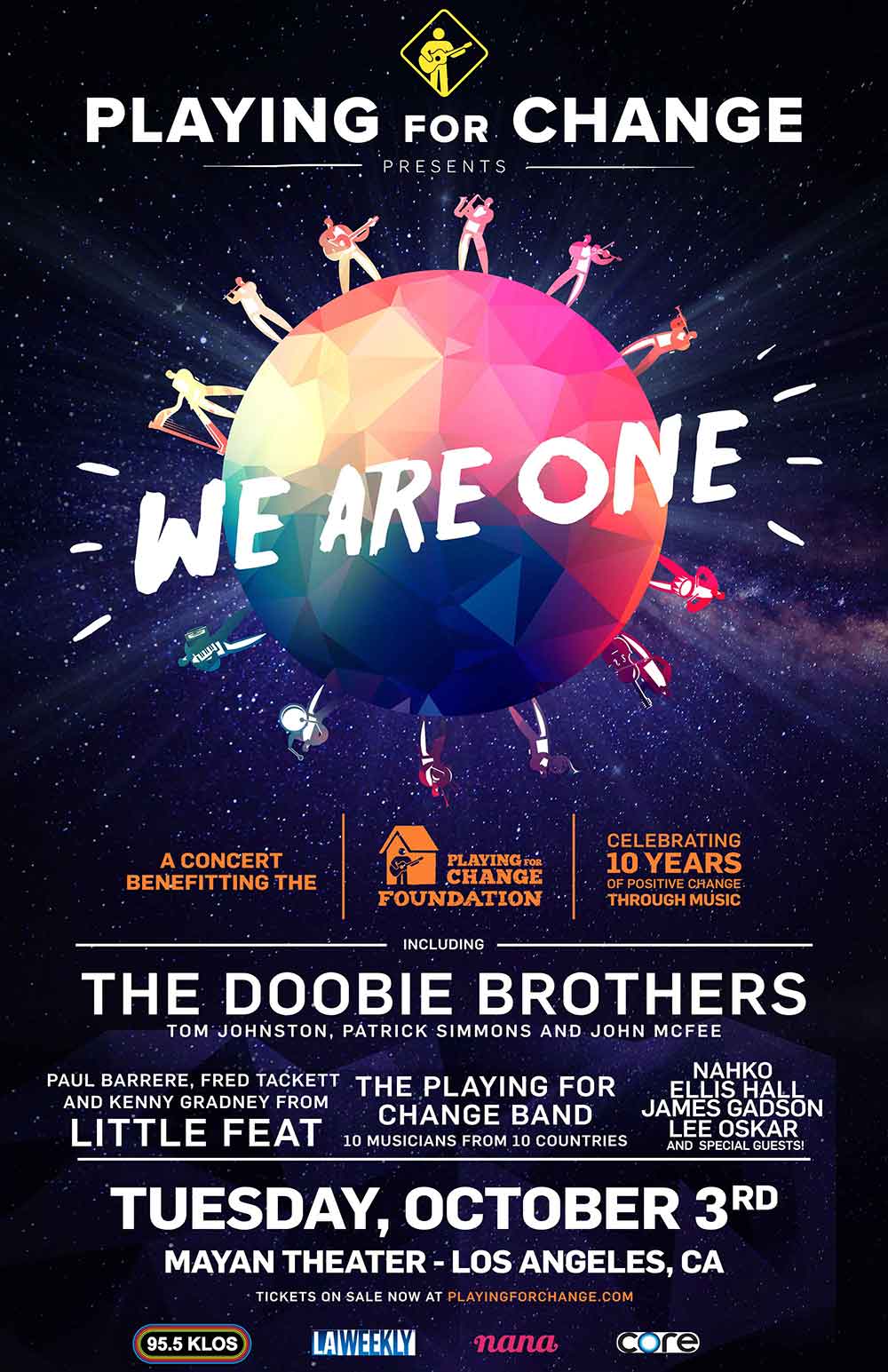 PLAYING FOR CHANGE ANNOUNCES WE ARE ONE, A BENEFIT CONCERT CELEBRATING THE 10TH ANNIVERSARY OF THE PLAYING FOR CHANGE FOUNDATION,
FEATURING THE DOOBIE BROTHERS, PAUL BARRERE AND FRED TACKETT FROM LITTLE FEAT, AND MORE
Tuesday, October 3, at The Mayan Theater
Los Angeles, CA, August 22, 2017  Playing For Change, the multimedia company responsible for the popular Songs Around The World video series, has announced it will host WE ARE ONE, a concert benefitting the Playing For Change Foundation and celebrating 10 years of positive change through music. Official partners for the event include Los Angeles premier rock radio station 95.5 KLOS, LA Weekly, and Japan-based music app Nana. The concert will take place on Tuesday, October 3, at the historic Mayan Theater in downtown Los Angeles and feature performances from The Doobie Brothers members Tom Johnston, Patrick Simmons, and John McFee; as well as Paul Barrere and Fred Tackett from Little Feat; The Playing For Change Band, that features 10 respected musicians from 10 different countries; world-renowned drummer James Gadson; The Ambassador of Soul, Ellis Hall; legendary harmonica player Lee Oskar; and more. Ticketing options include an exclusive VIP experience with a pre-show meet and greet reception with The Doobie Brothers and musicians, bar offerings, a priority seating area, and VIP gift bag which includes a commemorative poster. Tickets for the benefit will be available at 10 a.m. PST on Friday, August 25.at https://tickets.alistixs.com/event/weareone
Playing For Change has garnered much success over the years by combining musicians from all walks of life, all over the world and showcasing musics unifying power. Their videos have more than 450 million total online views, with their first Songs Around The World video, Stand By Me, accumulating more than 100 million views on YouTube since its release in 2008. Artists such as Keith Richards, Bono, Jack Johnson, David Crosby, Jimmy Buffett, Sara Bareilles, Manu Chao, and many others have participated in these multi-cultural videos performing songs such as Bob Marleys One Love and War/No More Trouble, Otis Reddings (Sittin on) The Dock of the Bay, and John Lennons Imagine. Playing For Change's new record, being released next year, features The Doobie Brothers along with more than 20 musicians from across the globe in a Song Around The World version of the band's iconic hit song, "Listen to the Music." The video for this song will be premiered at the show on October 3rd.
The Playing For Change Foundation, a separate 501(c)3 organization, was established in 2007 in order to give back to the communities of the musicians met while filming these videos. Now embarking on its 10th year, the foundation has developed 15 music programs in 11 countries including South Africa, Rwanda, Nepal, Thailand, and Argentina, and serves more than 1200 children. All proceeds from the WE ARE ONE benefit will support free music education as well as supplemental primary educational support, and life enhancement services provided by the Playing For Change Foundation and assist in its effort to serve even more communities.
"When one thinks of the thousands of children around the world positively impacted by the Playing For Change movement, gaining free access to music education in their own homelands, the love over a decade is simply immeasurable," said John McKenna, Executive Director of Playing For Change Foundation. "What better place to celebrate than right here where it all started? We look forward to an unforgettable evening of joy, celebration, and recommitment to the children everywhere, through united love and song."
This concert represents 10 years of traveling to over 50 countries connecting the world through music. From the streets and villages to the stage to the hearts of the people, Playing For Change, states Mark Johnson, Co-Founder of Playing For Change.
About Playing For Change
Playing For Change (PFC) is a movement created to inspire and connect the world through music, born from the shared belief that music has the power to break down boundaries and overcome distances between people. PFCs primary focus is to record and film musicians performing in their natural environments and combine their talents and cultural power in innovative videos called Songs Around The World. From these videos they formed the Playing For Change Banda tangible, traveling representation of their mission, featuring musicians met along their journeyand established the Playing For Change Foundation, a separate 501(c)3 nonprofit organization dedicated to building music and art schools for children around the world. Through these efforts, Playing For Change aims to create hope and inspiration for the future of the planet. For more information, please visit http://www.playingforchange.com/.
About the Playing For Change Foundation
Playing For Change Foundation, a 501(c)3 organization, was established in 2007, providing music education in areas that are culturally rich yet economically challenged. Children in countries around the world, from Africa to Latin America to Southeast Asia, attend free classes in music, dance and languages, taught by qualified local music teachers and led by regional administrators. Students learn about their own cultural traditions while employing technology to connect and share experiences with others around the world. For more information, please visit http://www.playingforchange.org/.
Press Contact:
Bobbi Marcus
Bobbi Marcus PR & Events, Inc.
O: 310-889-9200
E: [email protected]